These days, the French press is seen as a rather archaic means of brewing coffee and, to be honest, that perception isn’t entirely inaccurate. However, Coffee Gator has recently brought the French press kicking and screaming into the 21st century with its modern take on Attilio Calimani’s design.

The Coffee Gator French Press has converted hundreds upon thousands of coffee pod devotees to the French press. Will you be next? 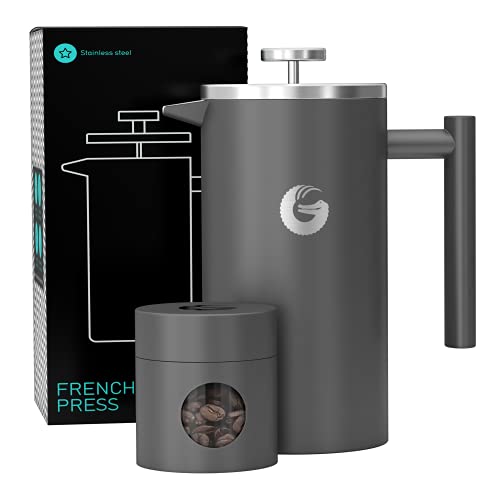 Released in early 2017, the Coffee Gator French Press is a French Press for the modern age. With its sleek exterior design, it blends wonderfully with the architecture of the contemporary kitchen.

Since it was first introduced, this French press has become one of Coffee Gator’s most popular products, owing to its convenience and versatility. However, cold-brew lovers may be better off purchasing Coffee Gator’s Cold-Brew Coffee Maker.

Brewing coffee using a French press takes a little bit longer than brewing coffee using a Tassimo or a Nespresso machine. If you’re looking for a device that will make your coffee for you while you tie your tie, the Coffee Gator French Press is not the product for you. That being said, the dedicated coffee lover is going to delight in the many features of this French press and the many flavors it makes accessible.

With the Coffee Gator French Press, you’ll be able to control the strength and the flavor of your coffee, a power that one-touch coffee makers will not afford you, and one that the aspiring barista inside you will love. It’s important to remember that the Coffee Gator French Press typically sells for just under $50, which is above the average price of a French press, so if you’re hoping to keep costs down you may want to look elsewhere.

For a French press, the Coffee Gator French Press boasts a surprising number of features and accessories. When you purchase the Coffee Gator French Press, you will receive a free mini canister in which to store your coffee. This canister, while perfect for home use, is small enough to be placed in your pocket and taken with you, so you can brew your favorite coffee at work or on vacation.

Coffee Gator also throws in a free eBook with each purchase of this French press. The eBook, titled 10 Hacks to Make Better Coffee, is straightforward and easy to follow and will turn you from a French press novice to a genuine master barista in just a couple of pages.

The Coffee Gator French Press is composed of military-grade stainless steel and its walls are 33% thicker than those of the average French press, which gives it an unparalleled level of heat retention.

It reduces the risk of burns and other injuries with a cool-touch handle, so inexperienced French press users have nothing to fear. Finally, the Coffee Gator French Press is double-layered and spring-loaded, which ensures no sneaky pieces of sediment make it to your cup and ruin the texture of your coffee.

If you have used a French press in the past, you won’t have any trouble mastering this product from Coffee Gator because all French presses are operated in a similar, if not identical, manner.

If you have no previous experience using a French press, however, it could take you a little while to get the hang of one. Never fear! The below video will teach you how to brew coffee using any French press on the market.

As we mentioned already, the Coffee Gator French Press goes for almost $50, which isn’t ideal if you’re trying to minimize the amount of money you spend. There are plenty of alternative French presses which offer many of the same features as this Coffee Gator model for a significantly lower price.

The rich taste of drinks brewed using this French press is heightened by the device’s multi-layer filtration function and its multi-wall heat retention system. With its required hands-on operation, the Coffee Gator French Press unlocks the many flavors that are lost when coffee is filtered instead of steeped.